So, uh, this is the first devlog for the game. Mask Up was released almost 7 months ago and there has been 2 significant updates. I don't know why I didn't think about writing about it here, because this is actually a pretty good place to share this stuff, where I'm not limited by 280 character, or pressured by an audience that don't want to read about the game. I might do more of these devlogs in the future.

I'm going to take this opportunity to give the detailled 3.2 patch notes, and talk about the state of the game & future plans.

This time, I took the time to polish some long overlooked parts of the game rather than adding new content. I hope people that still play the game will appreciate these small changes.

Comment: I made the early game a bit shorter and easier. This should allow new players to be able to go deeper in the world and experienced players to rush through this part faster. This changes also make ruleset-specific masks easier to obtain.

Comment: I think the shops are a really good place to make decisions that will impact the rest of the run. I wanted to give more choice to the player more often, so I made existing items like catfood, wings and the potted flower more usefull.

Comment: Most of these changes are about giving the player better control and feedback. The passive juice loss is a bit more experimental, so let me know about it.
Human sprites were pretty rough so I took the time to rework them. The player will now appear always on ground, rather than floating a bit above it. Form 3's new screenshake triggered a lot of unexpected bugs, for instance whenever the player landed, some entities started flying high up. This was because the gravity was set to 0 by default on some object that were'nt expected to move before, like stoplights or the cat.
About less funny bugs I fixed:

Current state of the game and future plans

The player base of Mask Up player is mostly constitued of players who downloaded the game on the Play Store. A month after the release, around 800 people had the game on their phones, this number is now down to about 500. There is a few downloads daily, most of the time from foreign countries. I had no idea my game would've reached this many people, thank you for playing! Theses downloads from russia and brasil may come from bots but I'll take it.

I have a lot of ideas for new features, but I can't guarantee anything. I'm a student and make Mask Up on my free time, this means that I don't always have the time or motivation to work on my projects. 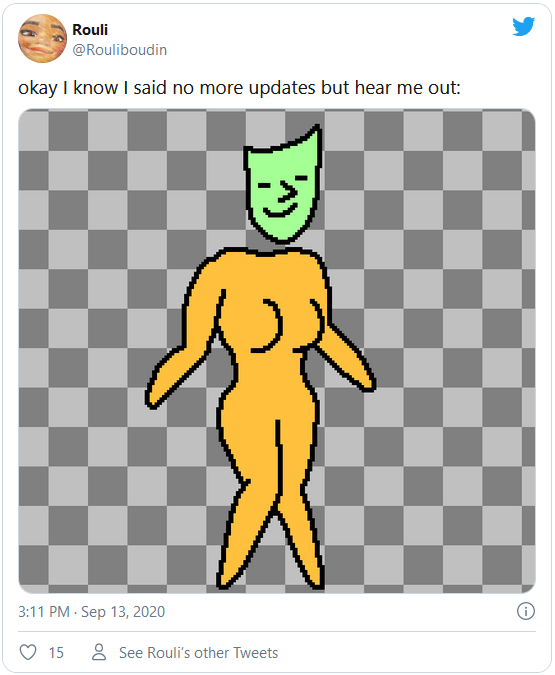 What I can definitely announce is that an updated PC port (Windows/Linux) is coming. I have been working on making the code of the game shared, which means the same code is compiled whether the build target is my android phone or my pc. I still need to make some plateform specific settings like a fullscreen toggle/rebind option on the desktop version, but the updated game is running fine at the moment. In fact, I've been using the pc version to test the game more quickly whenever I'm doing changes, because building on android takes more times and can sometimes be pretty buggy. This updated PC port might be my first paid release. Until then, you can still download the old 1.0 Windows port for free on the game's page.

Another thing I can promise is that the first player who legitimately gather all the masks will get to design a new mask (at least its unlock condition). A friend of mine is two mask short at the time I'm writing this, making him a likely candidate.

What really motivates me on working on the game is seing friends playing the game, sharing tips and tricks about it or bragging about their exploits. I love hearing about people discovering hidden things, or things I didn't even know could work. A good place to share this kind of stuff is the wiki, that I check every now of then . If you don't want to miss out about updates on the game, you can follow me on Twitter (but will have to endure my hot takes about Nintendo), or just subscribe to the Telegram channel.

Thanks a lot for reading, and see you around!

You can get Mask Up on the Google Play Store